Time for a Drinking Game!! 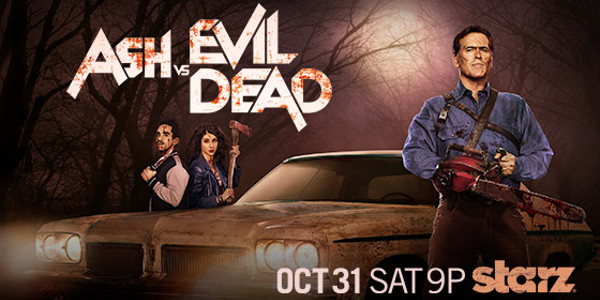 Soooo….I am a huge fan of the Evil Dead series and Bruce Campbell and Sam Raimi movies in general. So, it’s no surprise that on Sunday nights, you will more than likely catch me watching Ash vs Evil Dead series on Starz. Recently, it occurred to me while watching an episode of the show (now in its sophomore season) that there should be a drinking game for it. A quick search online told me that no one has as of yet produced a comprehensive one, so I figured, eh, why not me?

So, here we go. My version of an Ash v. Evil Dead Drinking Game to play with your friends!

1. One drink for every time someone/thing turns into a Deadite.

I know what you’re thinking, here, and no everyone won’t be drunk two minutes into the show. Yes, the ‘turning into a Deadite’ thing is a part of the whole plot, but surprisingly, it usually only happens once or twice during the thirty minutes that you’re watching…unless it’s a season finale or something, then you might have to bust this rule down to a sip.

2. Two drinks every time Ash says something racist or sexist.

Double that if he manages to do it in the same sentence.

3. One drink every time someone gets covered in blood/guts/goo.

This one happens at least twice literally EVERY episode. As a bonus, you can add a bet for how long it takes for someone to get splashed with something. Tip: Potential betters should stay within the 3-5 minute range for best results.

4. One drink for every ‘Jefe’ uttered.

Make that two if it’s Pablo that says it.

5. Chug for every creative/unique kill or attack

So, this one is a special. Any Deadite can attack Ash with a knife or an axe. It takes a special kind of monster to try to kill you as tiny little doll.

6. Three drinks for anytime Ash loses a loved one.

That appears to be the theme of Ash’s life. You’d think it would happen more often. It doesn’t though. Ash has only lost a few people so far in the series.

7. One drink for every time Ash has a plan

8. Two drinks for every drug done/mentioned.

Yes, two….in keeping in the spirit of the show.

9. One drink every time Ruby/Kelly/Any female character does something bad ass.

10. One drink every time Ash puts on the chainsaw.

Because, come on. You know you love it when he screws on the chainsaw.

That’s about all I could come up with. All things considered, I imagine that with just those eleven, you will more than likely get smashed within the first half of an episode. I strongly advise that all participants play responsibly!